Free shipping above €50,- in the Netherlands

0
Home > Information and advice > What do worms eat?

What do worms eat?

You hear a lot about what worms should or should not eat. For example, you regularly read on the internet that worms should not eat certain things or are out of the question. Many of these lists that are going around on the internet are quite different from each other. I regularly hear from people that they have a problem with their worm bin. There is often a suspicion that this may have to do with giving certain vegetables or fruit.

I myself could always well imagine that certain products do not work well in a worm bin, such as lemons. These are so acidic that logically does not seem useful.

When we have our special worm breeding soil made, we also ensure a PH value around 6-7. Lemon has a PH value of 2-3 and is therefore very acidic.

What about peppers. A little chilli peppers bring tears to most people's eyes. What must a little worm have to experience. And what about onions and garlic?

If you have to believe the stories, it's not all that easy. But we are no longer satisfied with that. Time to find out once and for all!!

Yes, you read that right, we are going to test everything one by one to the extreme. Of course we always take the welfare of the worms into account. We have now run several tests. We will cover all of these over time. Namely:

The setup is as follows 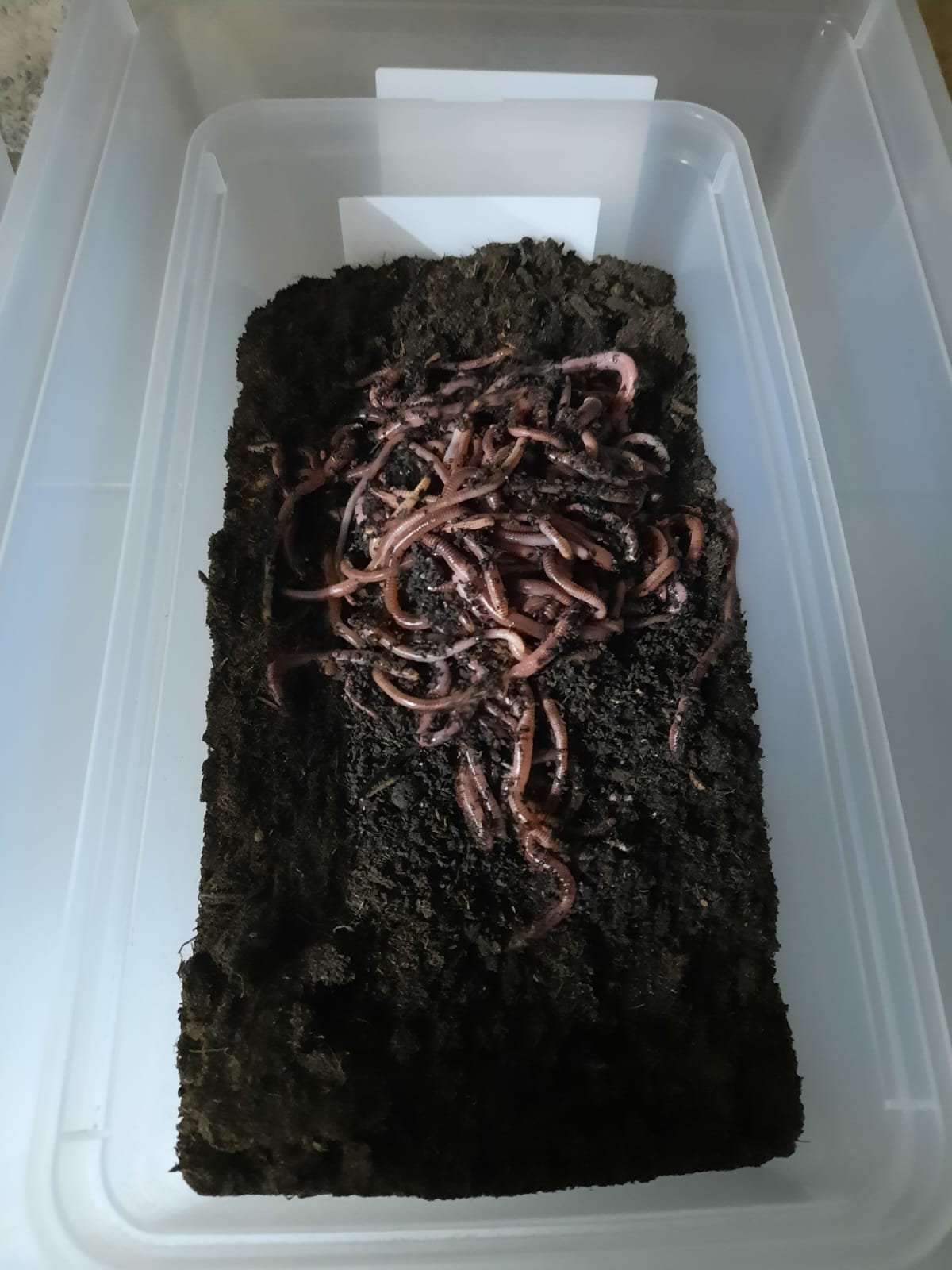 The worms get a fine bed of about 50% worm culture soil and 50% of something else. This means that the worms will eventually get 50% brown (rich in carbon) and 50% green (rich in nitrogen). So there is enough variation here. 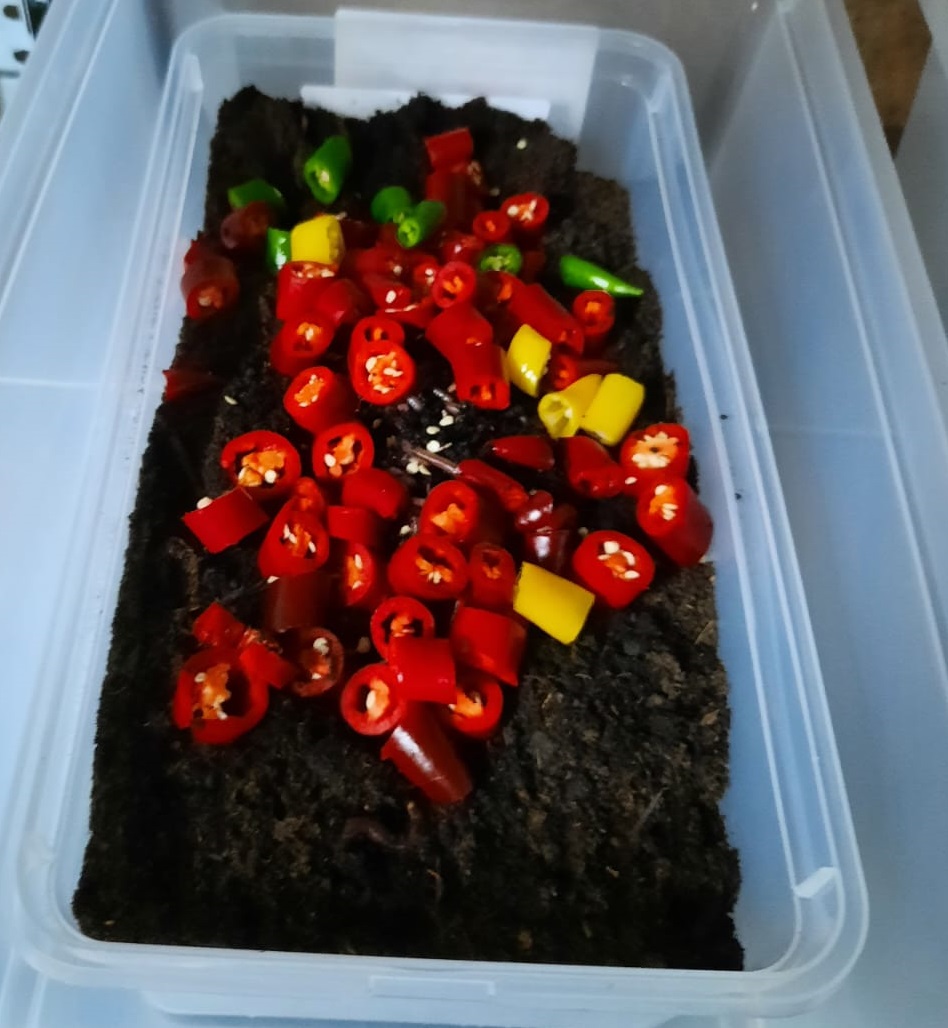 The first thing we're going to discuss are the peppers. Peppers are one of my most favorite plants. Besides that they look very nice and have a tropical feel, they taste great in any dish. So we regularly have small leftovers of pepper in the worm tower. But can the worms also handle a diet with mainly peppers? 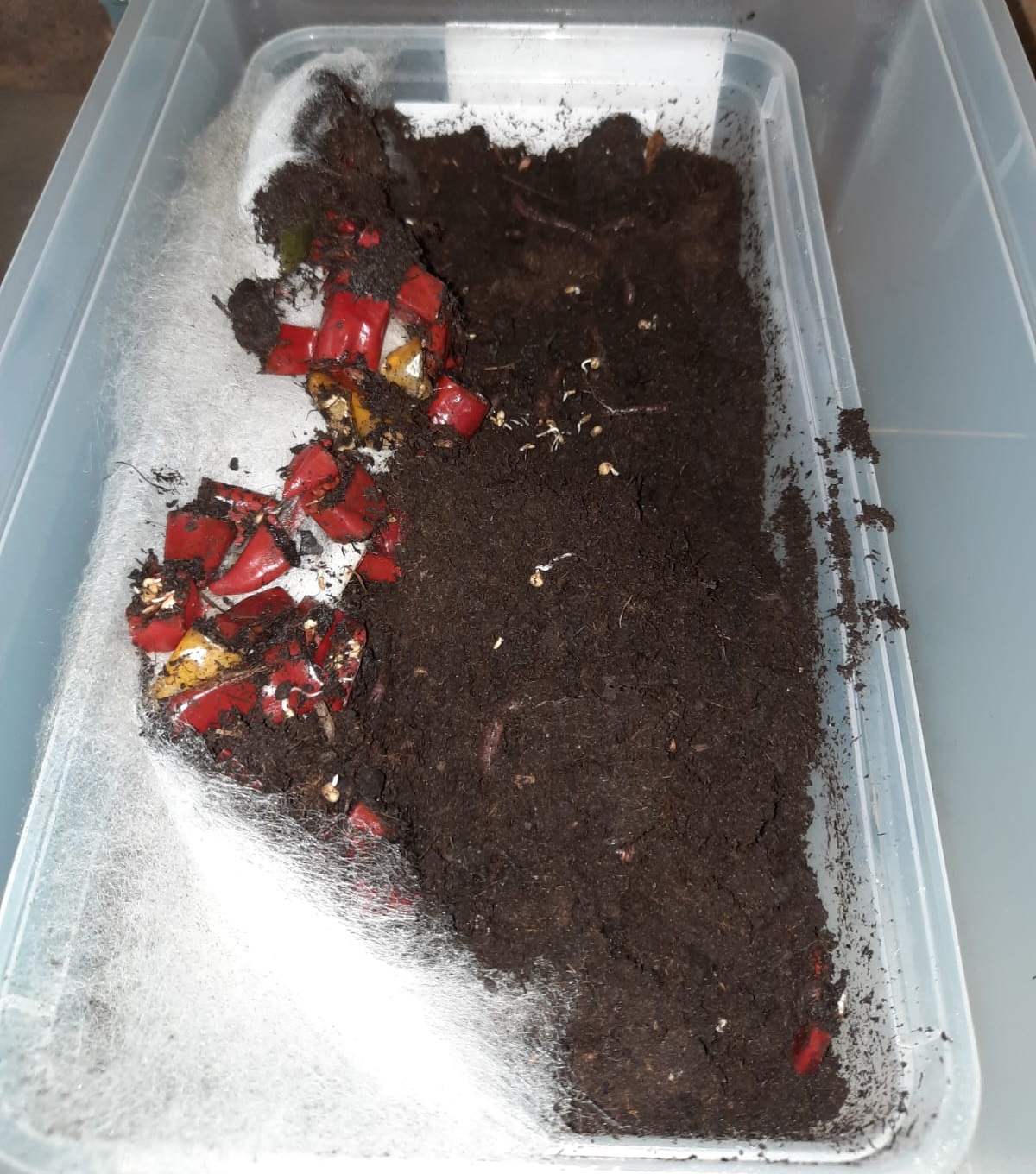 Now 7 days later and the worms have not crawled out of the tank. That is a good sign. What stands out is the large white mold. Other than that it looks fine. The worms are nicely spread through the ground and seem to be eating the peppers already. The ground has become a bit drier. All in all it's going great so far! 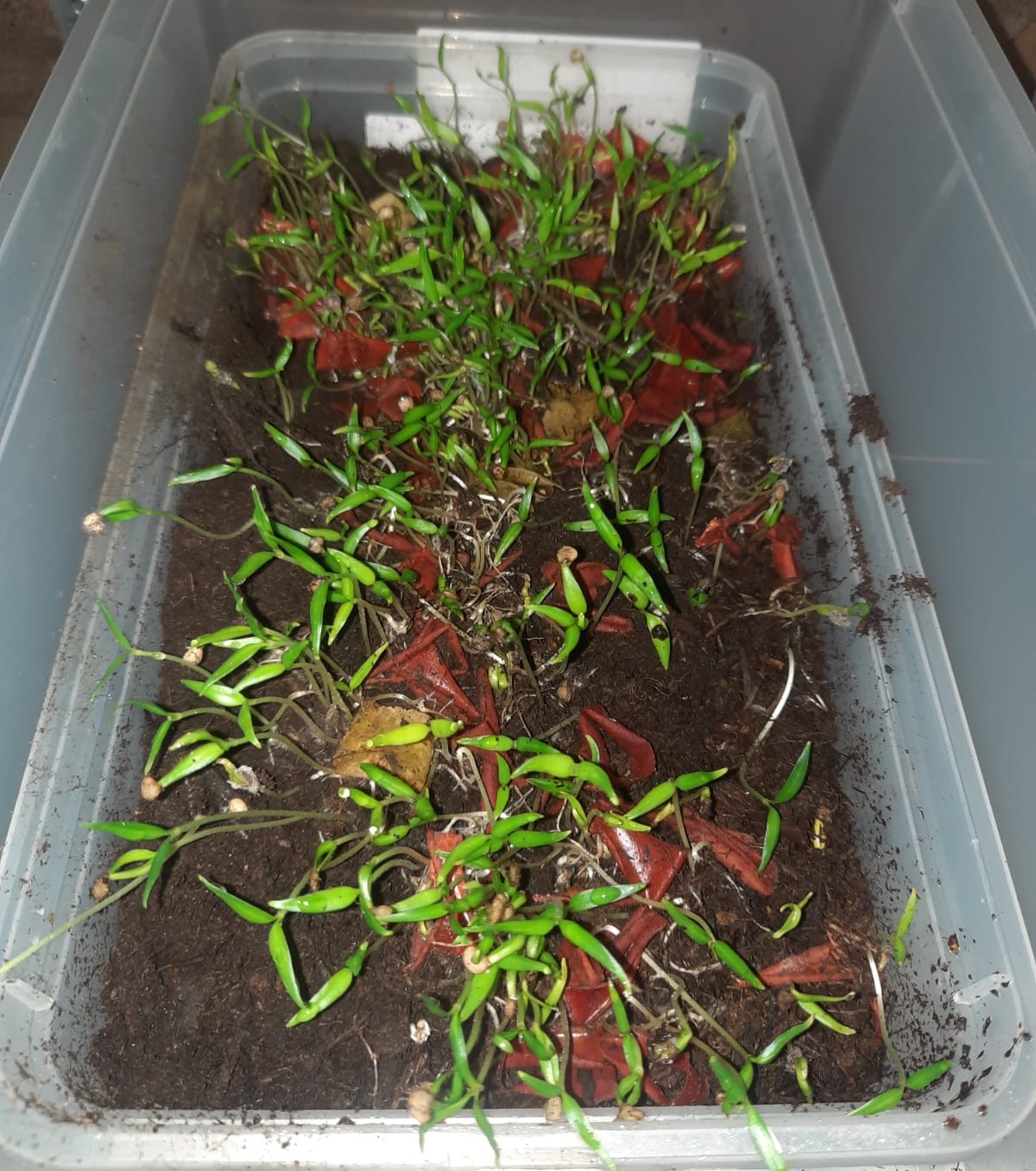 The worms are doing well. The slightly dry soil makes the worms nice and round and sturdy. Furthermore nothing special. 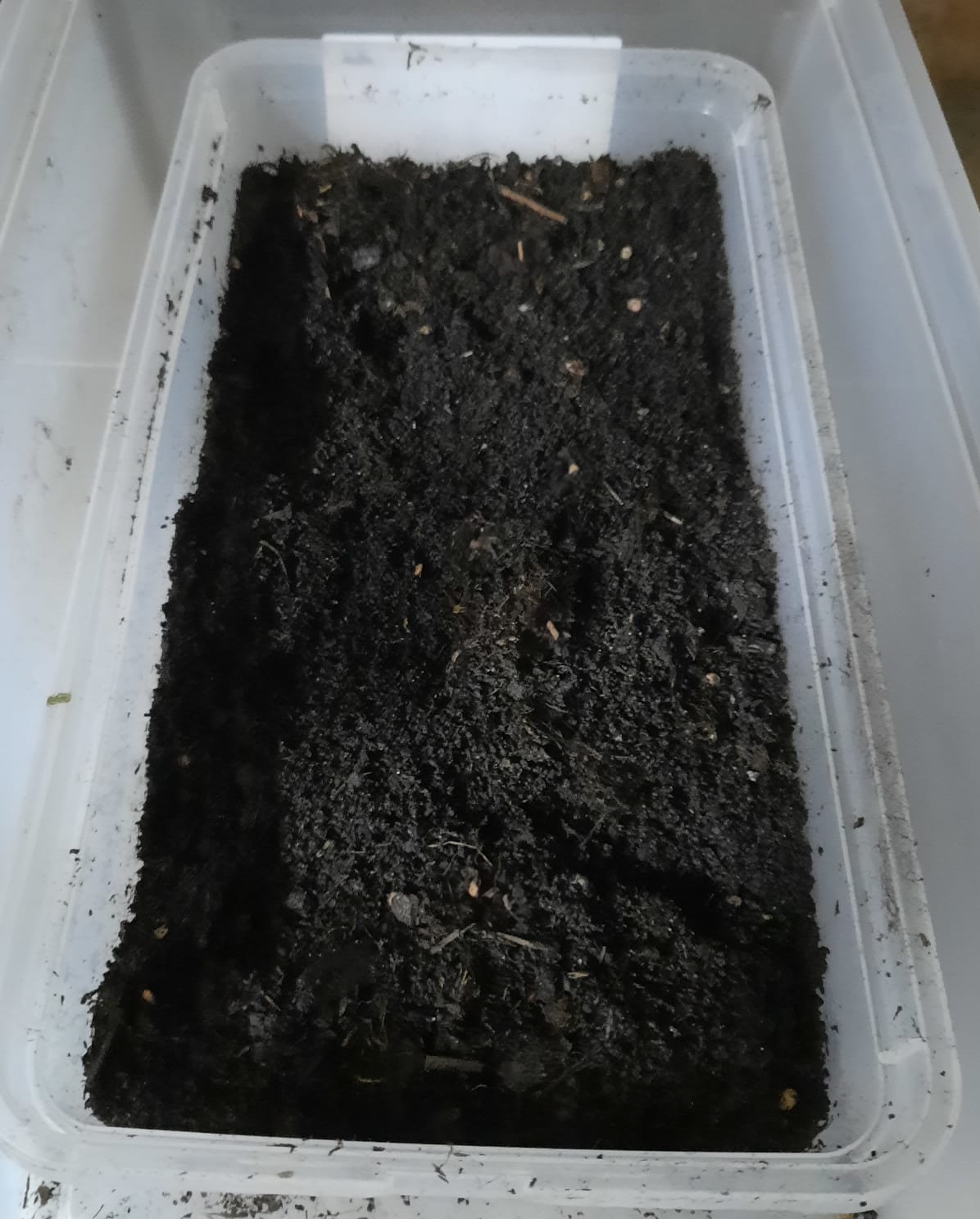 48 days later there is nothing left of the chilies. Everything has turned into nice dry crumbly worm manure. Ready to use. The worms have been sifted out and are doing well.

From now on I can say with certainty that chili peppers, no matter how hot, pose no threat to worms. There are even some advantages:

Peppers give off little moisture. The advantage of this is that you can give a lot of it without the container getting too wet. So you can safely give it when your tank is already a bit too wet.

Actually, pepper is a two-stage rocket. First, the worms can eat the pepper peel. After 2 weeks, all pepper seeds hatch, which die again due to lack of light and thus provide fresh food again.

I find the end result of the worm manure remarkably good. It is nicely dry and crumbly and does not stick to your hand.

Have you always put the chilies separately in the green container? That is no longer necessary, in fact, it even seems to be recommended, if only because of the nice loose worm manure it produces.

Check out our assortment